The past week was the two year anniversary of my 2016 frozen white Fiesta ST.

So, I hear you ask, how’s the car going and do I have any regrets? The car is going really well and is truly a pleasure to own. Not once has the car broken down or left me stranded, I haven’t even had a flat tyre during the 38,000 kilometers that I’ve travelled.

Aside from three general services, which I’m having done every 15,000 kilometers, the only other servicing has been me rotating the tyres every few thousand ks to try and get even wear. The first service was a complimentary check service, with the next two costing $245.70 & $255.42, totalling $500.92.

Originally, I had ordered a set of monsoon guards for the front windows, but the dealership couldn’t manage to source any for the two door variant of the car. I managed to purchase my set out of France, that I then have to have shipped to the UK, before having them forwarded to New Zealand. With Invercargill being the “City of Water and Light”, we get quite a bit of rain and it’s great to be able to have my window cracked open an inch or two without water coming and to let in a bit of air so that the car doesn’t fog up too much.

Carrying on with the sheer amount of rain we get here, the mudflaps were also a bit of a must and do also provide good protection to the paintwork. The same goes for the side graphics, as they do help protect the lower parts of the door from road rash. Ideally, I’d love to have some kind of paint protection film on the car – but I just can’t justify the cost.

The tints should hopefully save the rear of the driver seats and rear seats from those harmful UV rays and also mean that if I leave any gear in the car, such as my work laptop or camera – it’s not totally visible to passerbys.

What are the future plans for the car? A fresh set of tyres will be due, as I don’t believe they’ll do much more than 40,000ks. I’ve done some research and I’m going to put Bridgestone Potenzas on the car again, but put the RE003 Adrenalins on instead of RE050As that I’m currently running. The RE003s are supposed to have superior grip in the wet, which has been my only complaint with the current tyres. Plus, I noticed while washing the car that after two years, I’ve finally curbed one of my rims – so I’ll likely get them refurbished in a lighter silver when I go to put the tyres on. Other than that, it’ll just get driven. 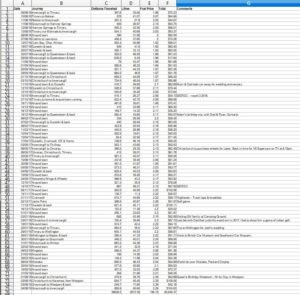 Because I like to keep track of fuel, the above shot shows that I’ve stopped a total of 74 times for fuel and pumped 2672 litres at a cost of $5,648. The last couple of fuel stops have been the most expensive as fuel has increased to $2.39/l for premium.

I’ve posted a video of the ST getting a quick wash & then a walkaround of the car after two years. Check it out:

Hope everyone is having a great weekend!