Up early on Monday morning, we hit the road for our first destination of the day, the British Car Museum, just out of Napier. 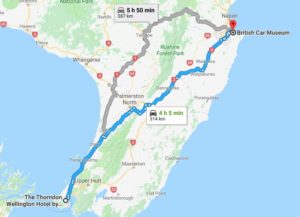 The ST sitting by the Havelock North sign, about 5 or so kilometers from the museum. 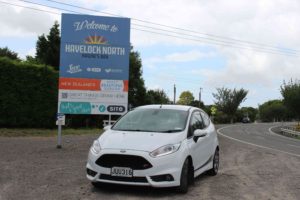 The ST parked up outside the Museum. 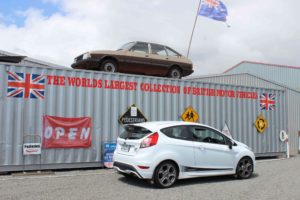 His claim to fame with the British Car Musuem is that it is the largest collection of British vehicles in the world. The owner, Ian, told me that he doesn’t know of any other collection, this size, in the world with only British vehicles. He’s constantly adding to the collection too, with a number of cars purchased in recent months. 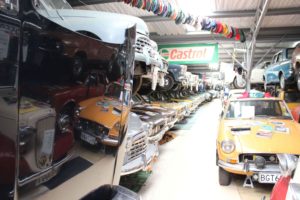 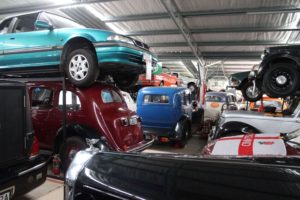 There sheer number of cars was staggering and Ian has many stacked and racked throughout the venue. Just about every car sitting on floor level was supported by axle stands. The local auto store must love him! 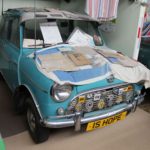 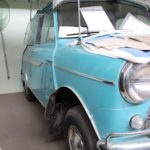 Two of Ian’s favourite cars in the museum. The first is his Jaguar S Type, which he brought brand new in 2003 and has since only done 8,000 kilometers in. It was like new. The other was his 1963 Mini, which was his first ever brand new car – purchased soon after he has completed his apprenticeship as a youngster. The Mini wasn’t in ‘factory’ condition, but all the modifications were done soon after he purchased it, including the chrome down the side and also the spats that he had made and painted up for the rear wheels. 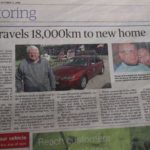 Another interesting vehicle was this Rover 75, which had been gifted by a guy in the UK before his passing. Ian had to pay to have the car shipped over from the UK & also had to pay some import taxes back here, so it certainly wasn’t the cheapest. I’m sure the previous owner will be pleased that his car is in such a nice collection now.

Aside from just cars in the museum, Ian had lots of other little collections going on. A number of the vehicles had period magazines, brochures & advertisements sitting on their bonnets for you to look at. Some of these classic magazines were pretty interesting. I even managed to find an original road test of the Mk2 Cortina: 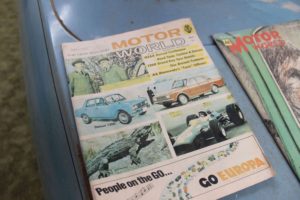 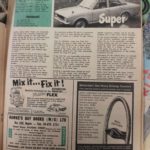 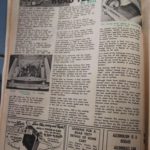 I also found this magazine with the Honda Aerodeck on it. The Aerodeck was a 2-door Honda Accord, in shooting-brake guise. Sold between 1986 & 1989, it’s no wonder that we don’t ever see these on the road. Before reading the article below, I hadn’t heard of this car, let alone seen one in the flesh – but I was intrigued because of just how unusual & rare it is. The Wikipedia page provides a little more information for those that are interested. Upon checking the license plate, the car featured in the article was still in use in 2016 with a recorded 233,000 kilometers. Between 2014 – 2016 it looked as though the car was averaging 140 kilometers each day, so suspect it’s still going strong today, possibly with 326,000 kilometers if the current owner kept to his recent form! 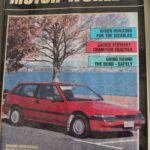 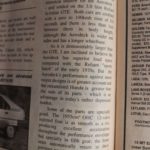 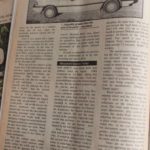 We then popped upstairs, where Ian demonstrated a couple of his player pianos. These are usually powered by foot bellows, but the one pictured Ian had re-powered with an old vacuum cleaner that could blow air out. This saved him having to pump the foot bellows. I wouldn’t be surprised if he had the largest collection of musical rolls in New Zealand – he said that there’s still a company he can buy them from in the US. He had me search through one of the stacks, where I eventually located the ‘Invercargill March’, which he proceeded to have the piano play itself for us. 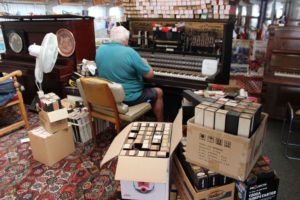 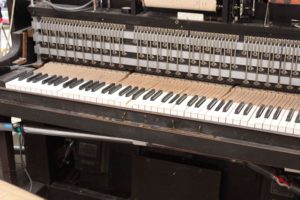 Another interesting segment in the Museum, is his collection of over 38 Morris Minors – most of which are in some shade of green. Each of the Morris Minors features a window sheet, with the name of one of his great nieces or nephews. He told us that this will stop them squabbling over which car they get when he passes. 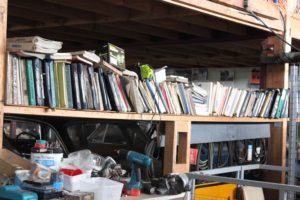 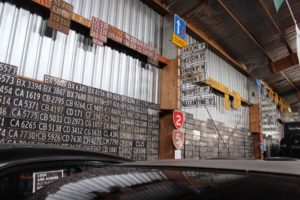 Pictured above are his large number of car manuals and his massive license plate collection. He has tried to assemble all New Zealand license plates from the conception of registration. He explained that originally you received a license plate every year when you registered your car, whereas, now we keep the same plate and just insert our new registration license in the window cards of our car.

I took the drivers seat of the old local fire engine that Ian had obtained. The picture on the right is a period picture from back in the 20s (I think). 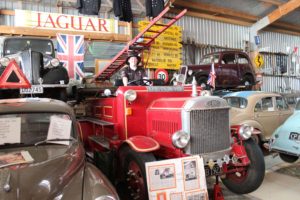 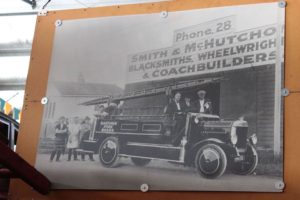 Ian was a great wealth of knowledge and truly passionate about his collection. Thanks for sharing this with the public, I hope to come back and visit in another couple of years.