Arrival & Collection of my Fiesta ST

As I’m sure most of you are aware, I ordered my Fiesta ST back at the end of 2015. Fast forward to the 3rd June 2016 and my car arrived in Invercargill. By this stage, I was a little excited and as I had the VIN number for the car, had been tracking the progress. I can even say that on the Thursday afternoon I jumped into the XR4 and drove 75kms out of town to see if I could spot the transporter on the road. In the end, the vehicle was delivered to my dealership in the early hours of Friday morning.

I flicked the salesman an email and queried him on the arrival around 8am. He replied within minutes and told me that once they had the car checked in and had looked it over for damage, he’d give me a ring and I could come and see it. At that stage he wasn’t even aware it had arrived! 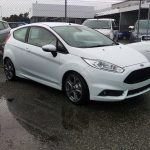 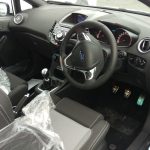 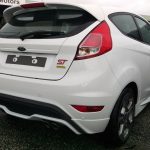 It was a wet and miserable day, so I bravely faced the weather and got a couple of shots while trying not to get too damp. We agreed that with the long weekend (as Monday was a public holiday), that they would have the car roadworthy and ready for collection on the Wednesday afternoon. I wasn’t too concerned, as I was away in Timaru for the weekend on the previously blogged British weekend.

Wednesday finally arrived and I collected the beast. Macaulay Ford always do a pretty good job of presenting customers with their new vehicles, and this time was no exception. When I arrived the vehicle was covered by a large red silk cloth. I got to stand and watch as the Fiesta was “unveiled” in the showroom! 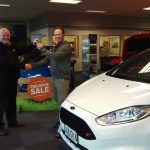 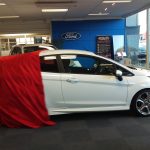 Hopefully I’ll be able to recreate the above photos in ten years with 500,000kms on the ST. Watch this space!

After having a brief run-down of the vehicle, I was on my way as the proud owner of my new ST. (I had already driven one about a year and a half earlier – as well as having spent some time in a couple of 1L EcoBoost Fiestas, so was already pretty familiar with all the controls).

On the trip home, I stopped and took a couple of shots with the only other known ST in Invercargill. I do prefer the lighter-silver wheels on the red ST. Thinking in the future that I’ll have mine powder-coated in a similar colour – or potentially buy another complete set of rims and tuck these ones in the back of the garage. I’ll have to see how much the dealership want for a set of plain silver wheels! 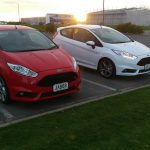 After that, I took the car home and packed it for it’s first official roadtrip on the Thursday morning. I’ll be writing a separate entry about the maiden voyage, so stay tuned.

2 Responses to Arrival & Collection of my Fiesta ST