It was our first time attending the annual South Cantebury All British Car Rally. Being held on Queen’s Birthday weekend, we had the Monday as a statutory holiday. Perfect opportunity to hit the open road and rack up some kilometers.

Nathan has been a few times before, so suggested that it was something we should attend. We agreed to a laid-back 9.30am start at his house, meaning we’d end up in Dunedin for a bit of lunch. Meeting at Nathan’s house, we collected some “extra” luggage that he couldn’t quite squeeze into his Mk4. 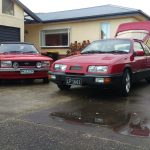 A 400 kilometer trip to Timaru, the five hour drive was pretty cruisy. We weren’t in any major panic and stopped a few times along the way for lunch, toilet breaks and petrol.

Up the next morning, we had to defrost the Sierra in the Hotel carpark and try and give the car a quick wash with some waterless wash in a bottle. For the three weeks proceeding this, in Invercargill, we had nothing but rain and miserable weather, so I was delighted. Meeting venue was the Caroline Bay Park carpark. 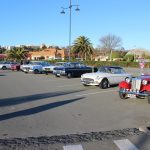 A couple of cars waiting to go on the cruise, including a yellow Mk2 Capri. A silver Mk1 Ford Escort, that got my vote as “car of the day” and a white Mk1 GT Cortina that looked mint. 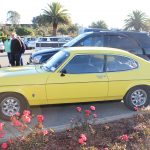 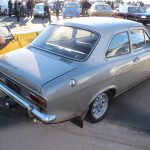 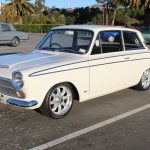 A massive turnout of British vehicles, the organisers had only brought along 120 information/entry packs, so had to give another 20 vehicles just an A4 copy of the run sheet. Always good when the number of entries exceed what you had expected.

The organisers had two seperate runs organised, so depending which one was in your entry pack, depended on how you arrived at the final destination. In the driver’s briefing at the start of the day, they told us the destination for anyone who got lost along the way.

Dad & I are terrible with instructions, so we happily followed the vehicles that were heading on our route, which worked pretty well. There was only one slight mishap, where about five or six of us missed on of the turns and had to perform a U-turn to get ourselves back on track.

Our route utelised some fantastic roads, which neither Dad or I had driven in the past. It was about 100 kilometers, of which we have both agreed we will happily drive again next time we’re in the area. 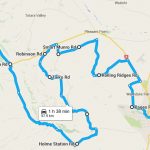 We ended up at the Albury Hotel, where we could use the facilities, order some lunch and have a cold beverage. With the sun out, most people chose to sit outside on deck chairs or, like us, have a decent wander around the vehicles in attendance and chat with the owners that we met along the way. Pictured below are some interesting vehicles – a Consul Capri that had been tastefully restored. A Mk2 GTE Cortina, the owner daily drives a 2 Door GT Cortina, and a neat Mini with matching BBQ trailer, which they cooked their lunch on! 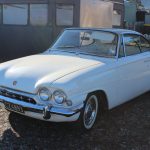 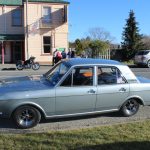 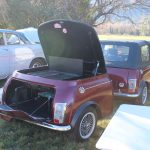 A couple of shots of the cars parked up outside the Albury Hotel. We were parked with a number of other cars in another paddock behind the Hotel (not pictured). 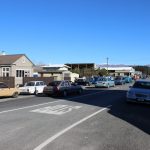 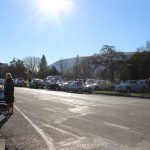 The rally was all wound up by about three o’clock, so Nathan suggested we headed over to a small township called ‘Cave’ and see their historic Church. We enjoyed a few more of the roads in our convoy of three (stopping along the way for an Ice Cream) and pulled up to the impressive looking Church.

Our three year ownership of the Sierra was dwarfed by the extended ownership of Nathan’s car (25 years at the end of July) and Ian’s car (which he’s had for over 30 years). In 3o years time, we’ll still have the Sierra in our posession too – we love it that much! 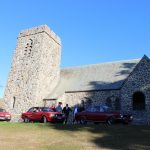 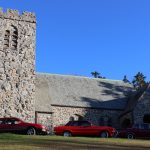 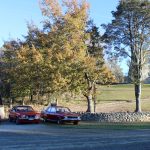 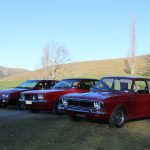 Yours truly, pictured with the Sierra outside the Cave Church. 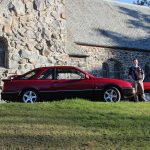 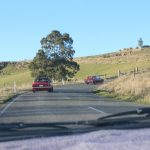 We cruised home from Timaru on the Monday, arriving back in Invercargill as the sun set. A great weekend away in some spectacular vehicles with some entertaining converstions. We’ll be back next year.