Another year of the Otautau Classic Car Show. Held on the 16th Feburary 2016, with the weather holding up in chilly Southland.

It’s been one of those shows that I come to year after year, as originally it was an ‘All Ford’ day, but has now opened to all marques. 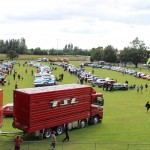 Here is a shot of the field from up the hill, showing most of the vehicles in attendance. A good assortment of cars to keep anyone interested for a couple of hours while you wander around and have a look. 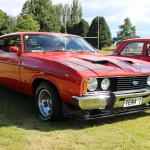 Tena had her XC Falcon Coupe out. Looks stunning with the houndstooth interior and the state she always keeps it in. Sounds like she’s in the process of restoring her late father’s coupe too – no doubt the cars will make a stunning pair once she completes it. 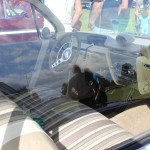 One of my picks from the show was this 1961 Buick LeSabre. Looked superb inside and out, would have to suspect it took hundreds of man hours to get it to this stage. I just love the sweeping chrome trim that runs the length of the car. Stunning!

It’s not often that you see disc brakes this large on a classic like this – which makes me interested in what the owner has tucked under the hood? Thinking it has to be a pretty impressive drive-train for this much stopping power.

A cool Pontiac that was sitting down in the grass. I’m not normally a huge fan of colour-coded bumpers, but they just suit the theme of this car. Same goes for the air-brushing – not normally my cup of tea – but it was all executed so well that, as a package, there was so much to like. Well done to the restorer! 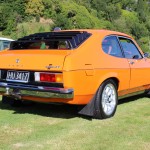 Of course, I had to get a shot of my Capri – as well as the couple of classics to the right (Rod in the EH Holden and Nathan in the MK4 2-door Cortina) that we cruised out and back with.

Overall, was a decent way to spend a Saturday and have a few laughs and enjoy what was on offer. Let’s hope the sun stays for the show next year!